The latest MIUI 9 by Xiaomi has been made official and is so far the fastest, smartest and the most optimized version of MIUI. The latest version of MIUI brings in a lot of software improvements and optimizations which will lead to faster app launch times than any other MIUI version till now. 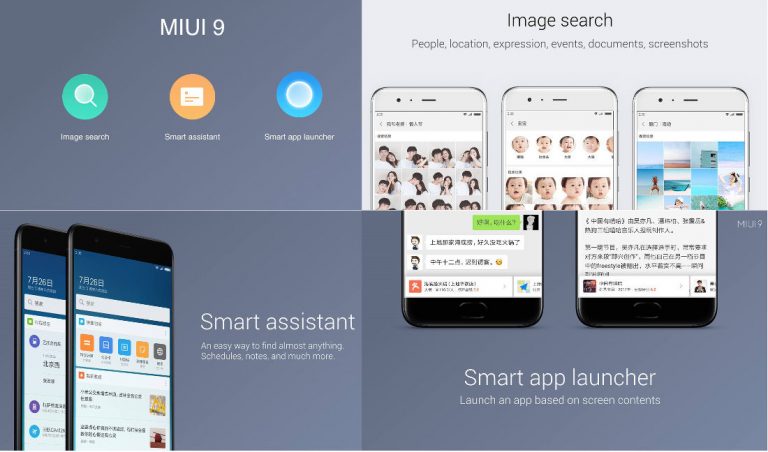 Apart from optimizations leading to a better UI experience, the MIUI 9 also brings in a lot of new features. Here are the MIUI 9 features:

Some of the features of MIUI 9 like the Smart Image Search, Smart App Launcher, and Smart Assistant will be only available in the Chinese build of the ROM initially. And support for features will also vary depending on devices. The closed beta release of MIUI 9 will start from July 27 on the Redmi Note 4 and Mi 6 Smartphones.

The public beta ROM release of MIUI 9 in China will begin on August 11 for the Mi 5X, Mi 6 and the Qualcomm variant of the Redmi Note 4X Smartphones. Whereas, starting August 25, other devices such as the Mi 5, Mi  Mix, Mi Note 2, Mi 5s, Mi Max 2, Mi 5c, Mi 5s Plus, Mi Note Pro, Redmi 4X and Mi 4c in China will receive the beta release update of MIUI 9.

Even though we do not have any details on the global release of the MIUI 9 yet, the release in China for all Redmi and Mi devices except the older Mi 1/1s/2A devices will begin by late September.