The Indian smartphone world has diminished for the very first time in its history. According to a market analyst firm, Canalys, the shipments of the smartphone in the country is down by 4% year on year. 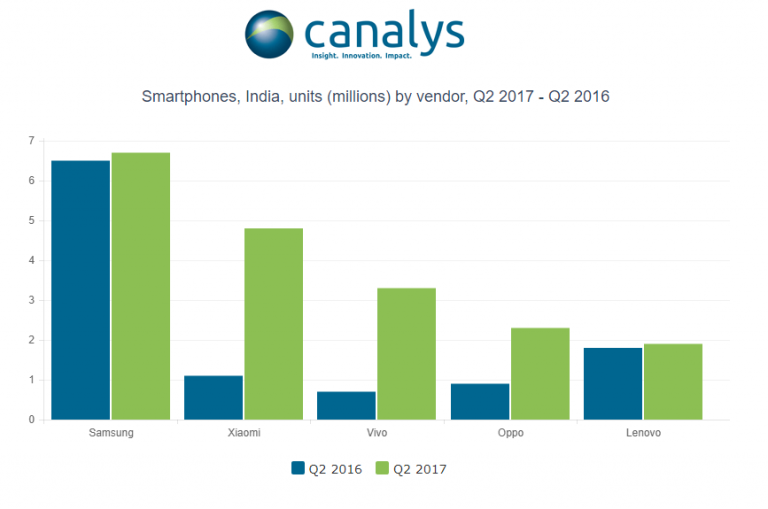 According to Canalys report, Samsung secures its number first position with a market share of 25%. Xiaomi has grabbed the second spot by shipping over 4.8 million units in this quarter. Surprisingly, Vivo took the third position by selling 3.4 million units due to its increasing popularity in tier-two and tier-three cities. Lastly, Oppo has seized Lenovo’s place and grabbed the fourth position while Lenovo left to fifth by shipping 1.9 million units.

The South Korean firm somehow managed to lead in the Indian smartphone ecosphere. However, it failed to focus on the budget segment which paved the way for the Chinese companies like Xiaomi, Oppo, and Vivo in the market. If Samsung wants to continue its lead in the Indian market, it should also focus on budget section rather than just targeting flagship ones.

The fan base of Xiaomi is increasing day by day, and the Chinese firm also delivers amazing budget smartphones. The rise of Xiaomi is a clear threat to the South Korean company Samsung. Around 50% of India’s smartphone market occupied by the firms like Xiaomi, OPPO, Vivo, Gionee, and Lenovo. Back on July 1 in India, Indian Government started The Goods and Services Tax (GST) across all products and services which has hugely affected the market this quarter.