Last month, we saw HTC come up with two devices, namely the HTC U-Play and HTC U-Ultra, which were quite a standout compared to the Android Smartphones we have come to see from HTC lately. They also made us think whether there will be a follow-up to the current HTC 10 flagship Android Smartphone.

Killing off our worries, we do see some leaked shots of what to expect from the unofficially titled HTC 11 Smartphone. A screenshot of the HTC 11’s About Phone page was uploaded to the Weibo microblogging site today giving us a glimpse of what might be powering the HTC 11. 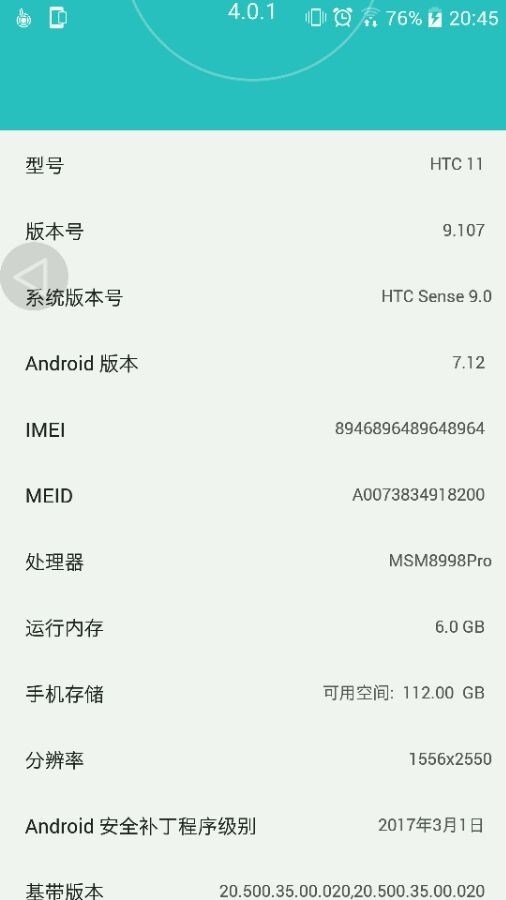 The leaked image shows the HTC 11 features the Snapdragon 835 processor, 6GB of RAM, 128GB of internal storage space. We also see the latest Android 7.1.2 Nougat operating system running on this device with the latest upcoming HTC Sense 9.0 custom UI on top. The hardware specifications of the HTC 11 seems top notch without a doubt and something a 2017 Android flagship should feature.

However, what seems more interesting is the display resolution mentioned in the picture. A Quad HD display will have a screen resolution of 1440x2560pixels. Whereas, the HTC 11 shows off a 1556x1550pixels display which gives you hints on an HTC 11 with a curved display.

With Smartphones like the Samsung Galaxy S8 and the LG G6 coming up within the next month with what looks like the best Smartphones ever from both the brands, it will a surprise to see what HTC has in store for us.

Are you surprised to know about the HTC 11? Do share your views below as comments.