Those days are gone where you need professional cameras to capture videos as memories. Now you don’t need to buy professional cameras by paying hefty amounts. Thanks to the growing technology, now anyone can shoot amazing videos on Android devices and iPhones. People prefer Android because it is a lot cheaper than iPhone and provides a lot of customizations and options compared to iPhones. 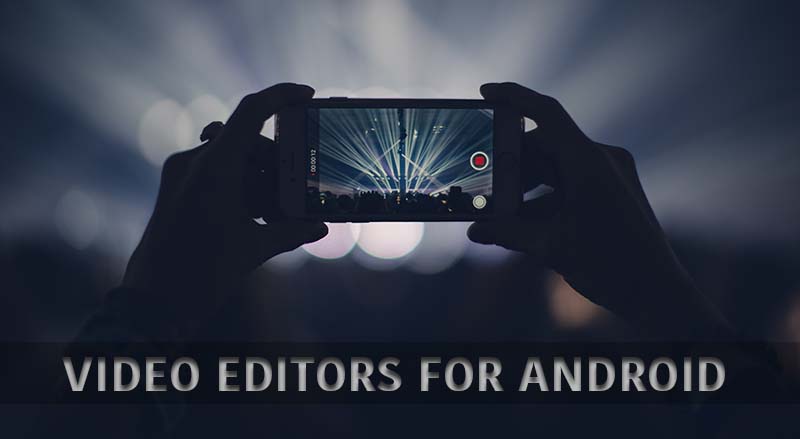 Adobe is a major player in developing software and apps for video/image editing purpose. Adobe Premiere Clip is one of the most downloaded and popular video editing apps in Google Play. It has a massive list of features and options to choose; you can easily add music in the background, add effects to your videos, add transition effects and texts and a lot more. Adobe Premiere Clip definitely deserves a worth shot as it comes with incredible features. The best thing is, you can download the app right away on your phone for free of cost from Google Play Store. 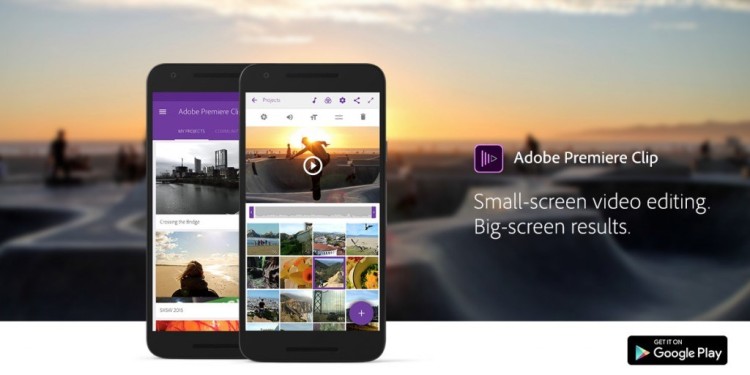 Quik is the latest video editing app for the upcoming generation. The app is really smooth and simple; it allows the user to add up to 50 photos or tracks. Monitor each and every track with Quik, add effects wherever needed and much more. It’s a perfect app for people who are looking for something simple. One with basic knowledge of Android can get used to it within a short span of time. Just like Adobe Premiere Clip, Quik is also available for free to download in Google play store. 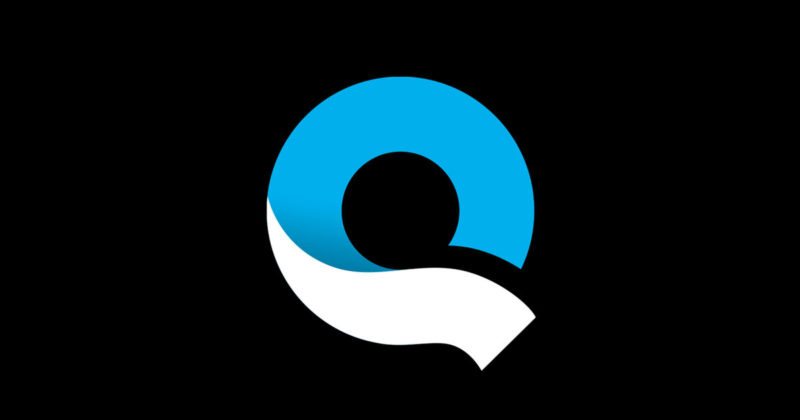 VivaVideo is just a basic video editing for Android phones. There are only a few outstanding features in it, but the way it lets the user edit almost any video is simply awesome. The options are very user-friendly; you don’t be an expert to use the app, even a newbie can get familiar with the options of the app in a short period of time. The free version of this app will give you access to a limited number of effects and styles, and a time restriction of 5 minutes, however, you can remove the restrictions by upgrading to the pro version. It’s really simple, and everyone should give it a try in my opinion. 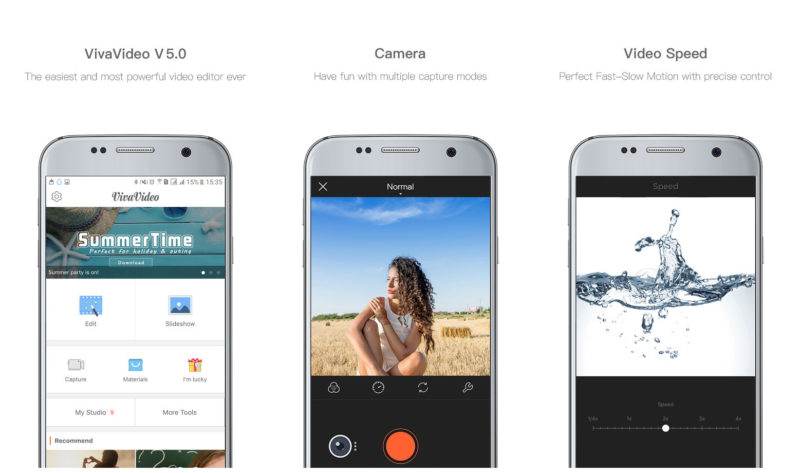 VideoShop is another feature-packed video editor for android. The app offers tons of features like transition animations, adding overlays, watermarks, stylish and colorful texts and much more. It’s a complete package for people who are looking for something professional and easy. The ultimate version just costs only 0.99$ which is not a big deal if you consider the amount of you are getting in it. 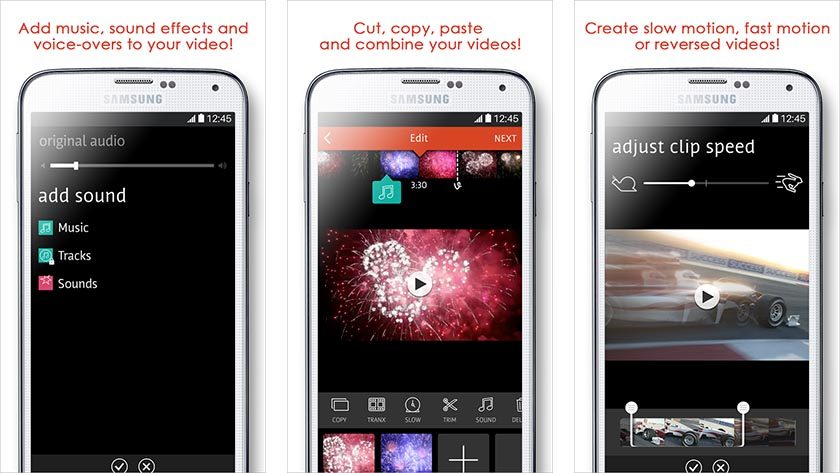 Vquick is a new entry in the video editing field, the main aim of the developers behind making this app is to provide a simple app for people who are running vlogs and journalism type of videos. The best thing about Vquick is it comes with self-destruct mode. If you have shared a video with any of your mates, once he/his finishes watching the video, it’ll be deleted automatically. It’s a great app for you if you’re running youtube channels or any video sharing channels. 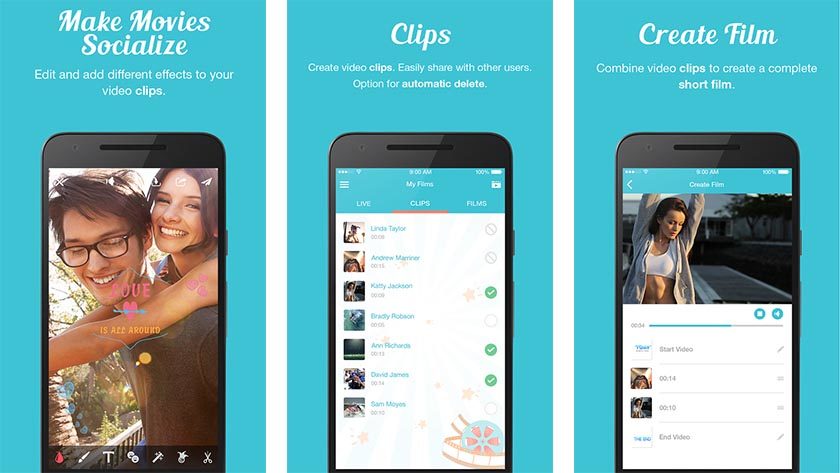 Video EditorMusic,Cut,No Crop is specially developed for people who are desperately looking for something really simple and easy. Video Editor comes with advanced feature including the core video editing stuff like cropping, resizing, adding effects, texts and much more. However, it doesn’t feature a strong and powerful coding to handle the big stuff, but still, it’s a trustworthy app, and of course what you can expect from an app which is absolutely free to download and use. 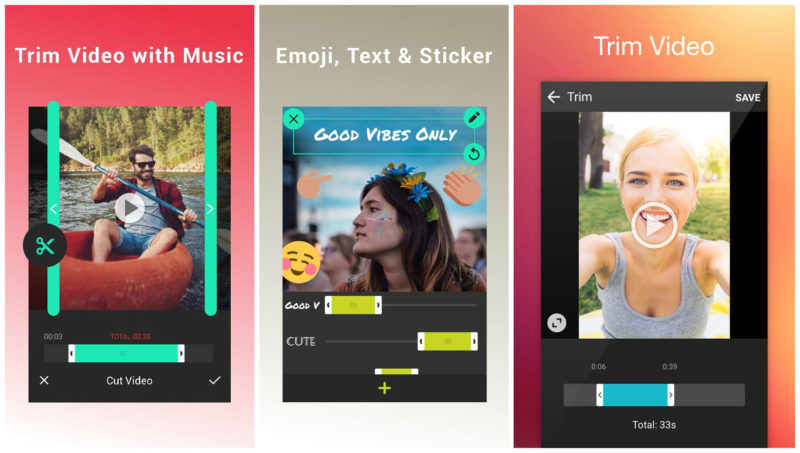 Video Show is the most underrated video editing app in google play store, though it is not capable of handling large stuff, but that doesn’t mean it is useless. It comes with a long list of features; you can add stickers to your videos, stylish texts, add realistic and artistic effects and much more. The controls are really simple in Video Show; they are very handy also. So basically, it’s a cool video editing app with simple coding which is good enough to handle small video productions. Give it a try; I am sure you’ll like it.

Power Director Video Editor is probably the last app on our list but not the least. Power Director is another popular name in the editing field; it is used by millions of people all over the world. Just like other video editing apps, Power Director also comes with good video editing options. It provides a timeline-based editing option which is really easy and helps a lot in syncing multiple tracks and videos properly. However, you will need to spend some money from your pocket to unlock all the features, it’s quite unique and works way more effectively than any other video editing app. 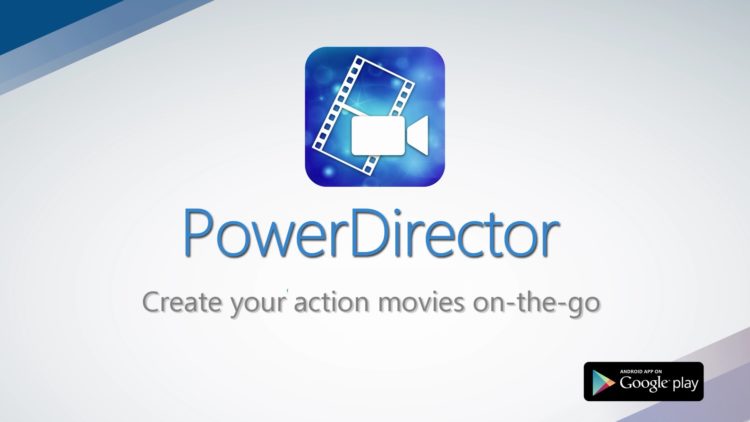 Kinemaster is another fully featured packed video editing app for android. With Kinemaster pro, you can add as many layers of videos, images, and audio files you want while editing. The best ting about Kinemaster Pro, it allows you to preview your project at any time.  Once you’re done with the editings, you can directly share your it over Facebook or any other social media platforms from the app itself.

If you’re at a beginner level or looking for something very simple, then I recommend you to try out We video editor. The app provides over 30 good looking and high-quality themes and special effects for free which you can apply to your videos. You can also add your voice over the video; the simplifies the effort of creating awesome videos. It may not be the popular video editing app, but it’s unique and simple in its own way. 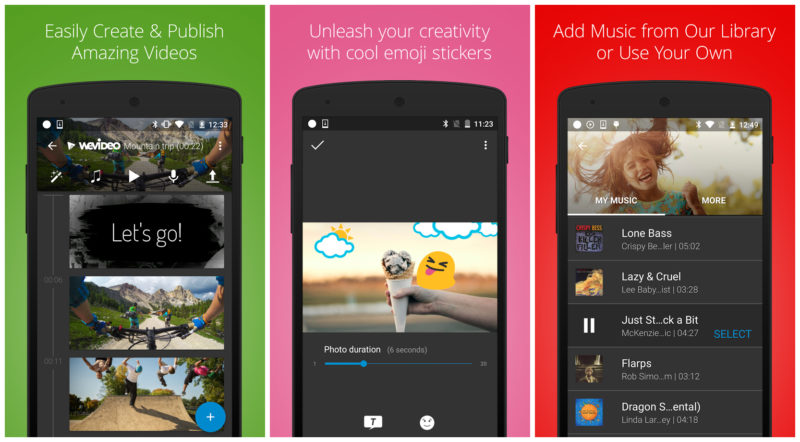 All the apps which I have shared in this article are entirely free to download. However, you may need to pay the money in order to unlock premium features. Some apps are absolutely free and don’t feature any in-app purchases. These were the best video editing apps of 2018 which I came across if you know any other worthy app then feel free to mention in the comment section. We’ll add it to our list as soon as possible.