The world is slowly moving towards 5G technology and so it is very easy to speculate that 2019 will be the year of 5G Phones. We already have confirmed news about the 5G smartphone from some manufacturers like Vivo, Lenovo, and Samsung and we are expected other top-tier manufacturers also to get in the 5G Mobile bandwagon in 2019 to pick on the latest technology and hype.

The main highlight of the 5G technology is that, unlike 4G which saw an incremental yet significant upgrade from 3G, 5G is expected to raise the potential of network connectivity like never before and bring new innovations in the form of super-smart cities and fourth industrial revolution.

If you take the 5G phones list for 2019, you can see that there are going to be a lot of 5G mobile in India, which means that by mid-2019, we can surely expect the 5G technology to reach major Indian cities and by the end of 2020 we should be able to get 5G coverage across all cities in India. To give you a better perspective of 5G mobile phones that are going to launch, we bring you a list of 5G phones that are expected to launch in 2019. 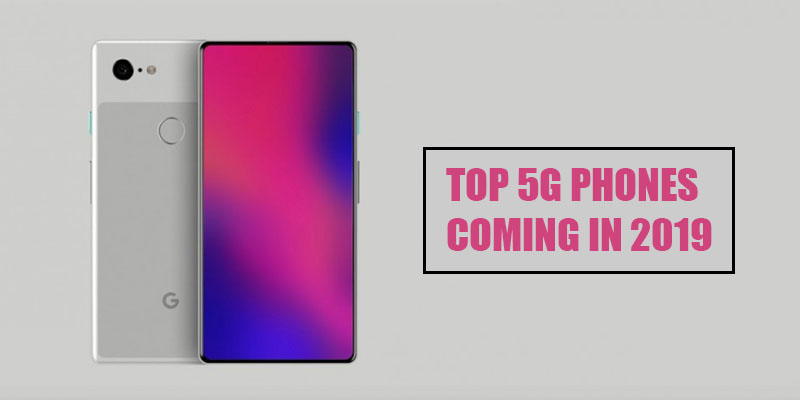 OnePlus CEO Pete Lau confirmed previously that they will launch one of the world’s first 5G phones when the 5G will be ready to roll out. 5G is expected to be available by the end of 2018. OnePlus will launch OnePlus 6T this year so OnePlus 7 might be the company’s first phone to feature 5G. OnePlus is also eyeing to make OnePlus 7 and OnePlus 7T available through US carriers. As of now, in the U.S. one can buy OnePlus devices as standalone units in America.

While in a few weeks OnePlus 6T will launch. The company is teasing some pictures and features of their upcoming smartphone to create the hype. OnePlus 6T will be very similar to OPPO R17 in terms of hardware. The device will feature Qualcomm Snapdragon 845 chipset with 8GB of RAM and Android 9.0 Pie out of the box.

The Samsung Galaxy S-series is one of the most anticipated Smartphone launches of every year. Since the very first Galaxy S Smartphone, Samsung has not failed to impress everyone each year with the new innovations and features that they add to their S-series Smartphone.

The latest Samsung Galaxy S10, which will release sometime in early 2019, is expected to continue the trend of featuring the latest technology and features by incorporating support for the 5G bands.

Huawei is the largest Smartphone manufacturer in the world and all of their Smartphone models are quite popular on a global scale, albeit the brand is facing some security and privacy-related concerns and issues in the United States.

Even though the Snapdragon 855 processor is the only processor we know so far to support 5G, the Huawei P30 will most likely feature Huawei’s own Kirin chipset with 5G, most likely to be named the Kirin 980 chipset.

The Apple iPhone XR, Apple iPhone XS, and Apple iPhone XS Max were just launched recently and it is quite early to talk about iPhone launch 2019. Moreover, Apple is not very much known for bringing the latest innovations early on.

However, as 5G technology is expected to be a game changer in many fields, Apple will most likely make the upcoming Apple iPhone X 2019 yet another 5G phone, especially as Apple iPhones are now the most expensive phones in the market and that tag will very much remain attached to Apple iPhone X 2019 as well.

Apart from the Smartphone models listed above, there are quite many 5G Smartphones that will make it to the 5G phones list in 2019.

Some of the confirmed 5G phones so far include a Sprint 5G Smartphone that is built by LG, 5G Smartphone from Lenovo, 5G phone from Vivo and more. We will add more details about these 5G phones as we get to know more about them in the future.

So those are the 5G phones list of 2019 that we know so far. Which among the 5G phones listed in the above article excites you? Will you be upgrading to a 5G phone in 2019 when 5G phones reach Indian markets? Do leave your views and opinions as comments below.