According to a Weibo source (the Chinese Twitter), Redmi has started working on its next flagship smartphone with MediaTek Dimensity 9200 chipset. The smartphone is expected to be revealed in the first half of the year. 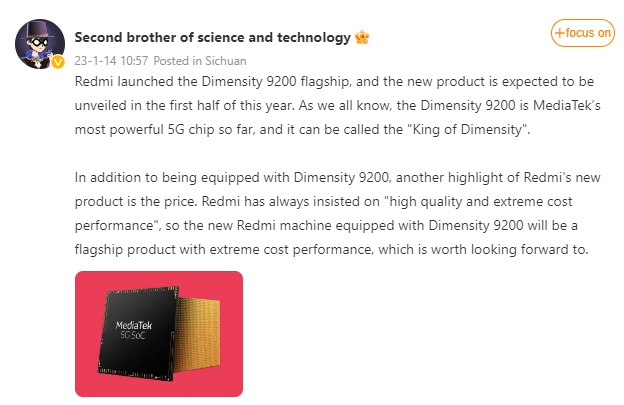 Some of you might already know, the Dimensity 9200 is MediaTek’s strongest 5G chip that is currently available, in fact, it’s called the “King of Dimensity” in China.

The chip is based on the second-generation manufacturing process of TSMC’s 4nm and has an Octa-core CPU, which’s energy consumption during peak use has been cut by 25% when compared to the prior generation.

In addition, it is equipped with an entirely new generation of GPU that is the Arm Immortalis-G715 (11 cores) which is 32% more efficient than its preceding generation. Regarding the performance of the CPU single-core performance, it is higher by 12% and the multi-core performances are 10% more than MediaTek Dimensity 9000 achieved.

Another advantage of the new flagship from Redmi will be the cost. Redmi has always been a firm believer in “high standard and high performance at a competitive price” so the new device with the Dimension 9200 chip will be an elite product offering high performance at an affordable price. We’ll have to wait to find out what it’s about.